So, what is the difference between machine and traditional watermarking? In theory, not much. Both traditional watermark molds and the dandy roll involve thinning a pulled sheet of pulp in certain places in order to make a translucent design/mark on the surface of the paper. But instead of using a mold and deckle, the dandy roll is a hollow, metal cylinder that has a raised wire design attached to its surface. With industrial technology like the Fourdrinier papermaking machine, after a paper sheet has been formed it travels to the dandy roll which lightly rolls over it and presses a design into its wet fibers (at this point, the paper sheet will be approximately 97% water). Like a traditional watermark mold, as mentioned, the roll displaces and thins the paper fibers in the area where the design is pressed onto the sheet.

Our museum has a plethora of watermarking materials, dandy rolls among them. The first of our museum’s dandy rolls looks like a giant rolling pin and has “ABE GMS” embedded across its surface in wire. The other, accession number 941, has faces embedded onto its surface and is an example of how intricate and detailed watermarks and dandy roll designs can be. 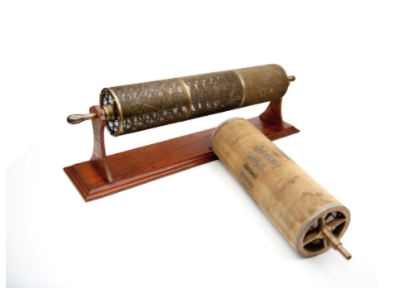