This month’s artifact is from our permanent exhibit; it is a book by Matthis Koops entitled Historical Account of the Substances which have been used to describe events and to convey ideas from the earliest date to the invention of paper. It was printed in 1800 entirely from straw. We chose this artifact for the month of November because it is dedicated to “George the 3rd, King of Great Britain, France, Ireland.” For you Hamilton nerds (or American history buffs), George III was the king of the British Empire during the American Revolution (1765-1783), and November is, of course, the month of Thanksgiving.

How does King George III/the American Revolution connect to Thanksgiving? Traditionally, the first Thanksgiving is understood to have taken place at Plymouth colony in 1623. ‘The Separatist Puritan settlers of Plymouth, known as Pilgrims, held a feast after their first harvest as a way of thanking God for their blessings. Invited to their observance were members of the neighboring Wampanoag tribe.’ Over a century later, and despite the hardships of the Revolutionary war, Thanksgiving celebrations still occurred, among civilians (usually the upper-class) and soldiers alike. In 1777, George Washington declared the 18th of December to be a day of “Solemn Thanksgiving and Praise,” and according to one source (from a private in the Continental Army writing in winter 1777), soldiers were given “half a gill of rice, and a tablespoon full of vinegar” for observance of the day. Moreover, like the Fourth of July, Thanksgiving is a wholly American holiday.

Matthis Koops, though not directly connected to the history of the American Revolution or Thanksgiving, is directly connected to the history of paper. Koops was a British papermaker who invented the first practical processes for manufacturing paper from wood pulp, straw, and recycled wastepaper without the necessity of including expensive linen or cotton rags. From 1800-1801, Koops operated the Neckinger Mill in Bermondsey, London. In 1801, Koops was granted two patents for his inventions. These patents granted him the "sole privilege of making paper from straw, hay, thistles, waste and refuse of hemp and flax, and different kinds of wood and bark" for a period of 14 years. The book at the center of this month’s Artifact of the Month is the first book printed entirely on straw pulp. 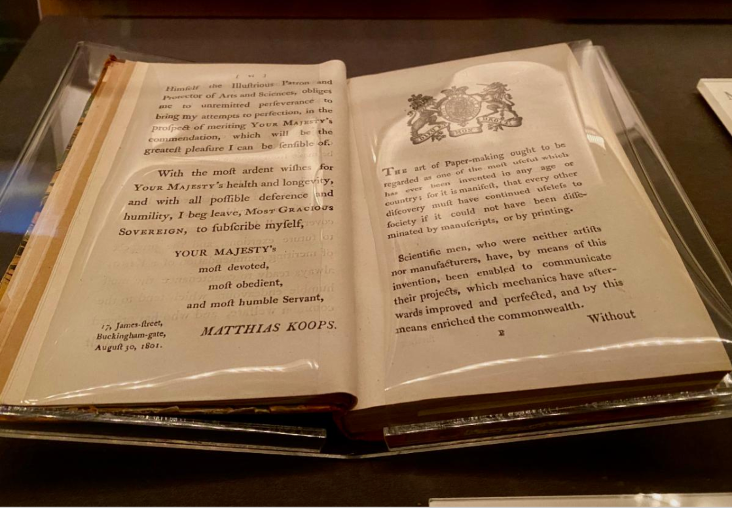 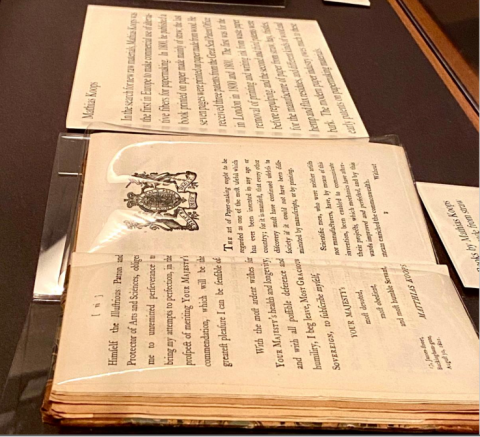