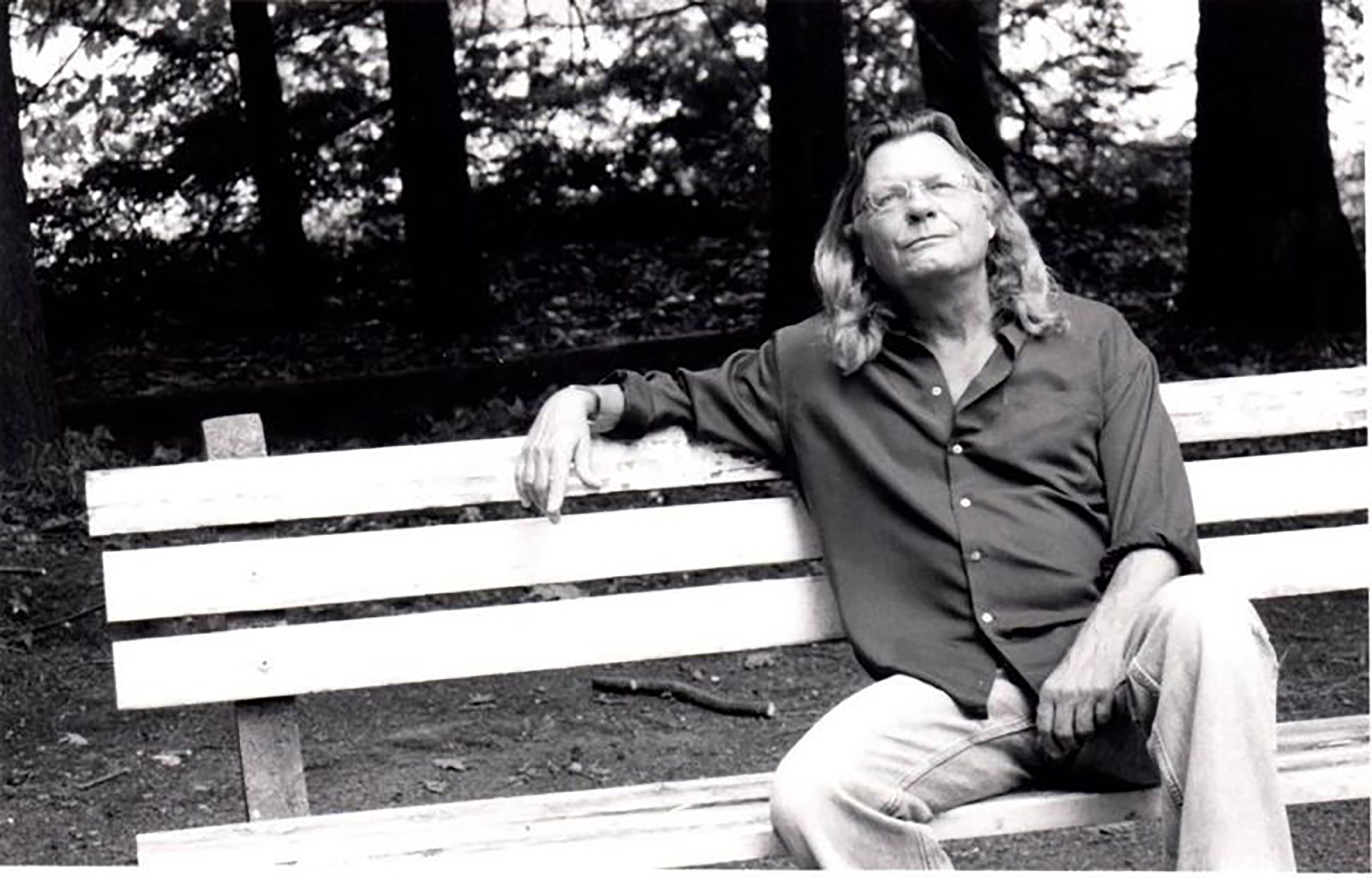 What is the legacy of Thomas Lux and Jeanne Duval Editions? What is the true purpose and value of small presses?  Where have you experienced ''radical generosity'' in your own life? 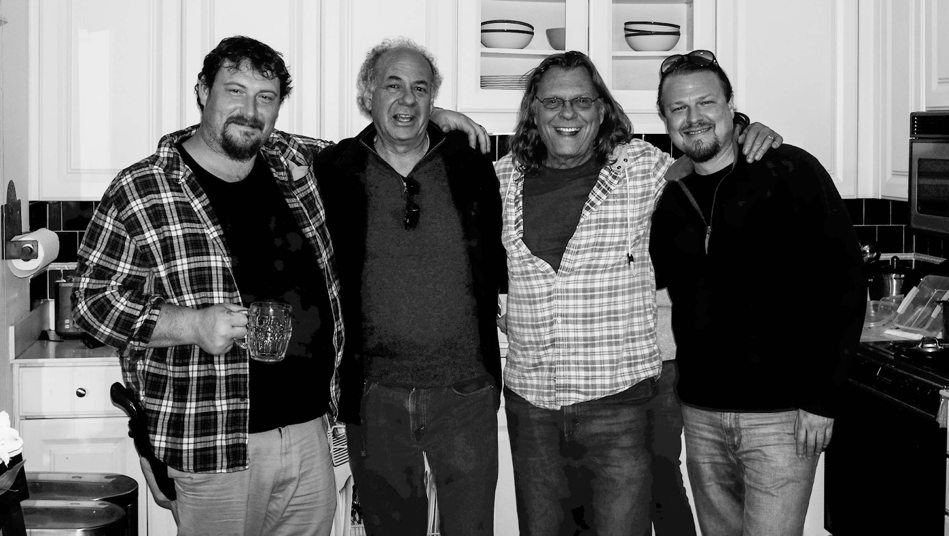 ''To publish poetry takes incredible passion and self-sacrifice... from the publisher's perspective. It's not an economically winning position. It's a way of giving the self away, which is very much what Tom did always... lf somebody's standing behind you, they want to publish your book, do that... because that's an act of tremendous generosity by the press."

Thomas Lux's commitment to publishing the works of emerging poets has been described as "radical generosity:' Lux sought out poets in all walks of life, prioritizing the work over status, hierachy, or income. He used small press printing as a tool to focus on poetry and encourage others in the process. By providing a pathway not present in the dominant publishing industry, Lux championed the experimental nature of poetry and opened doors for poets to gain a broader audience. 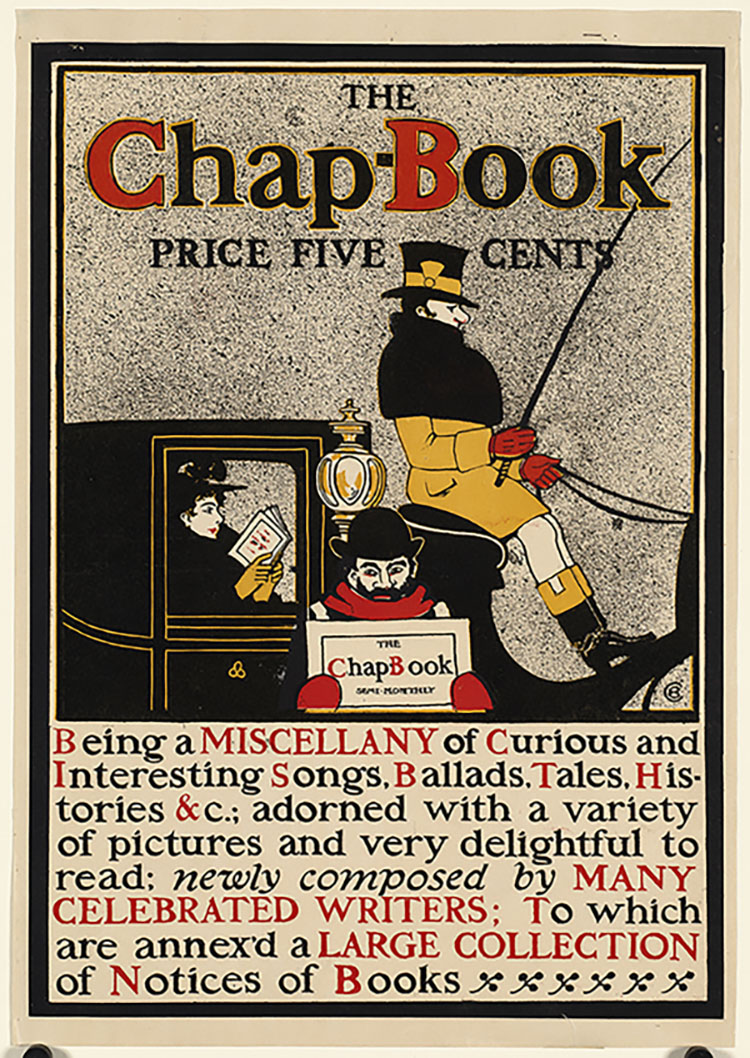 What is a Chapbook?

"Most of the books that he published ... were little chapbooks that were quite small, and with the staple binding and all of that. He mostly published poets who did not yet have ... a book of their own to hold."

Lux advocated for poetry in every aspect of his life. As a publisher, he focused on providing emerging poets with opportunities to develop professional reputations in their inaugural publications.

Nationally acclaimed poet, teacher, and publisher, Thomas Lux served as the founding director of Poetry@Tech and the first Bourne Chair in Poetry at Georgia Tech from 2002 to 2017. 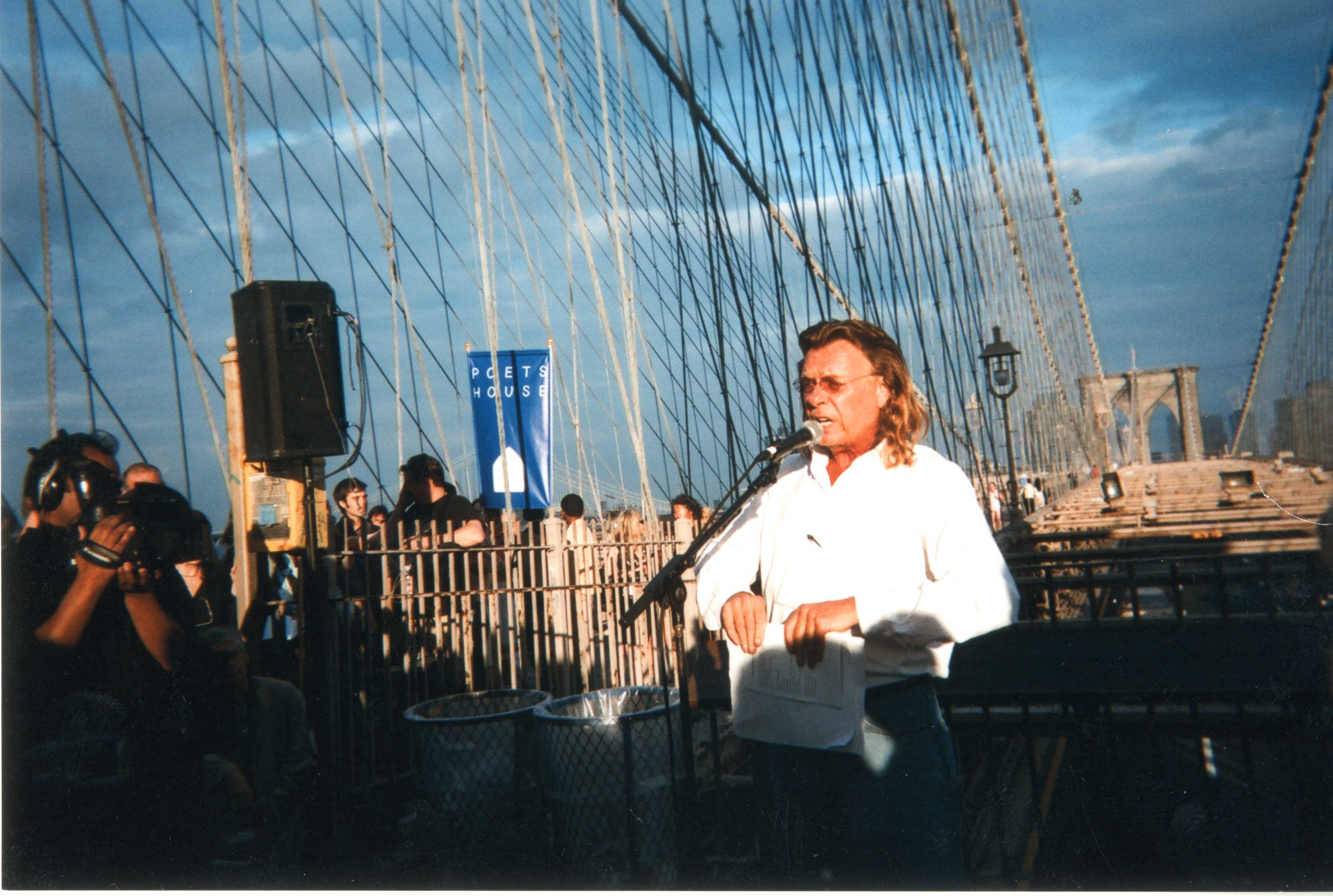 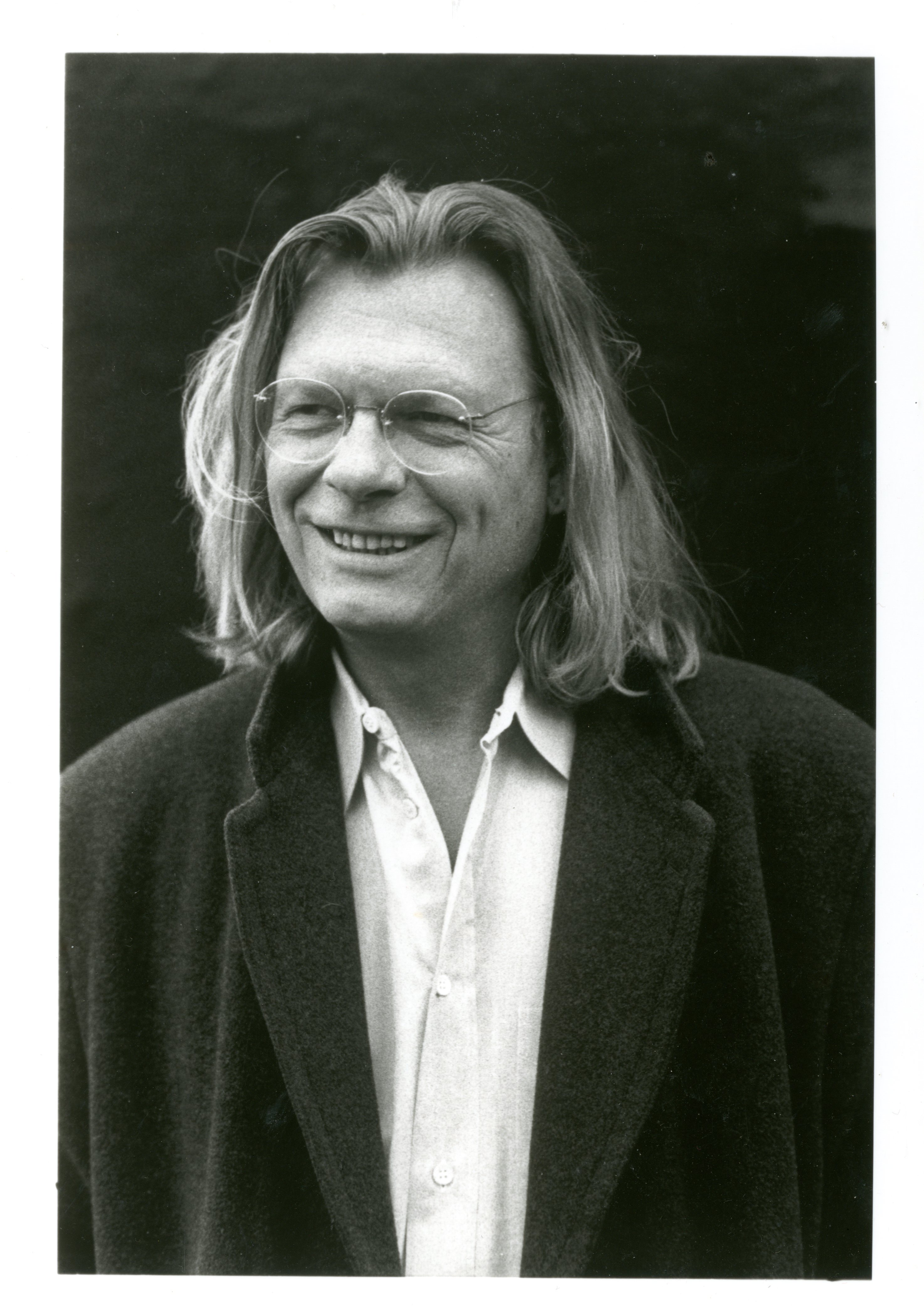 ''Lux was ever the writer and teacher who opened students' eyes to poetry, whether in the university classroom, a community workshop, a high-school library, a writers' conference, or at any of his readings."

The Master of Fine Arts Program in Poetry at Sarah Lawrence College and Poetry @Tech are two of Lux's educational legacies. Entwined with this work are the two publishing imprints he led. In the 1970s, Barn Dream Press was Lux's initial foray into publishing. By the early 2000s, Lux created a new imprint: Jeanne Duval Editions.

As a publisher, Lux focused on poetry and poets, urging writers to hone their talents. Lux's objective for the Jeanne Duval Editions was to expand the community of poets rather than seek personal financial success.

As a publisher, Lux focused on poetry and poets, urging writers to hone their talents. Lux's objective for the Jeanne Duval Editions was to expand the community of poets rather than seek personal financial success.

"[His goal was] to bring people together, and just to give them things freely, give them company, laughs, communication with others who shared the same passion they had"

Born in 1946 in Northampton, Massachusetts, to working class parents, Thomas Lux attended Emerson College and the University of Iowa. Lux was on the writing faculties of some of the country's most prestigious Masters of Fine Arts and Creative Writing Programs. His own poetry was recognized by the Guggenheim Memorial Foundation, the National Endowment for the Arts, the Mellon Foundation, and many poetry organizations. Lux passed away in 2017. 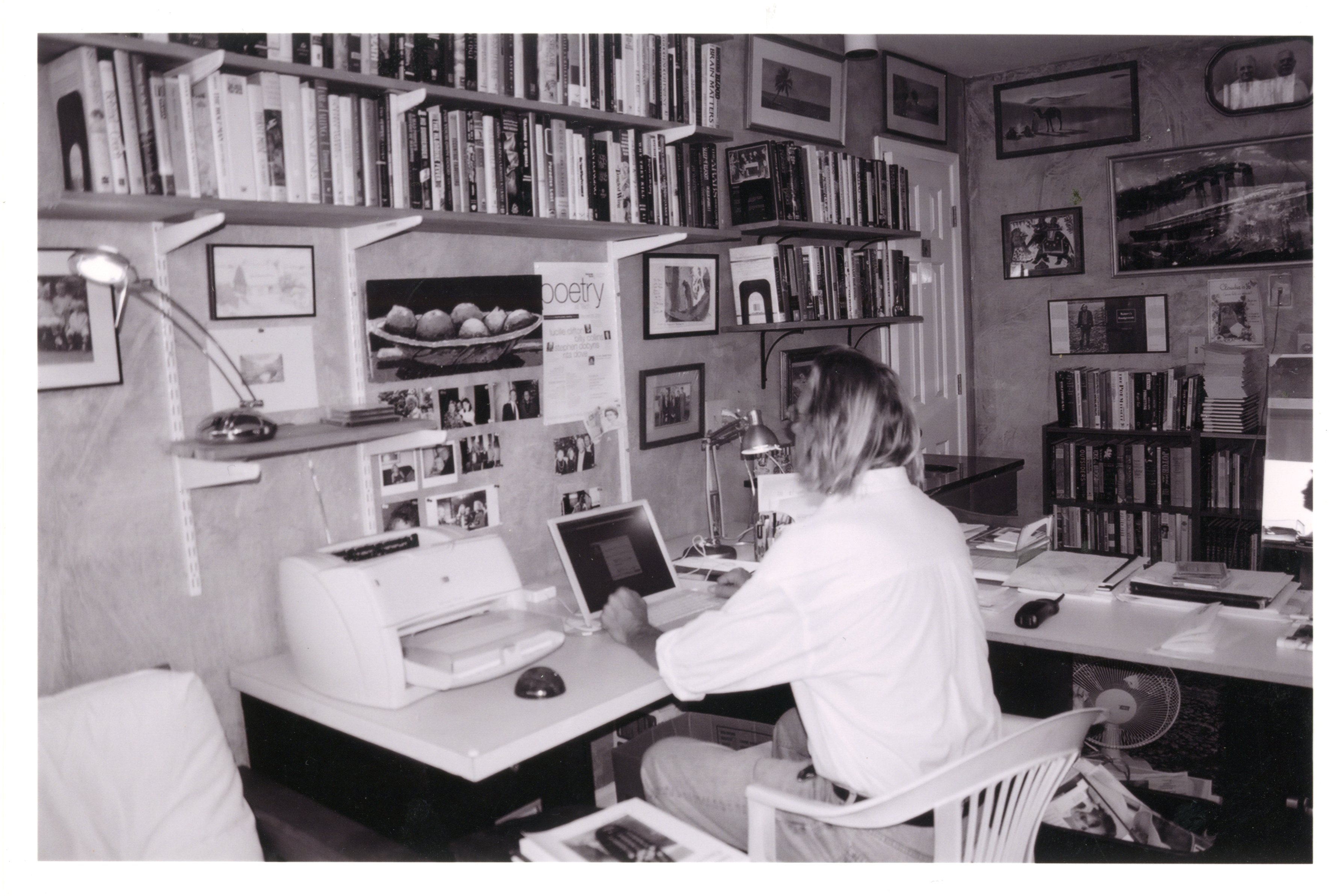 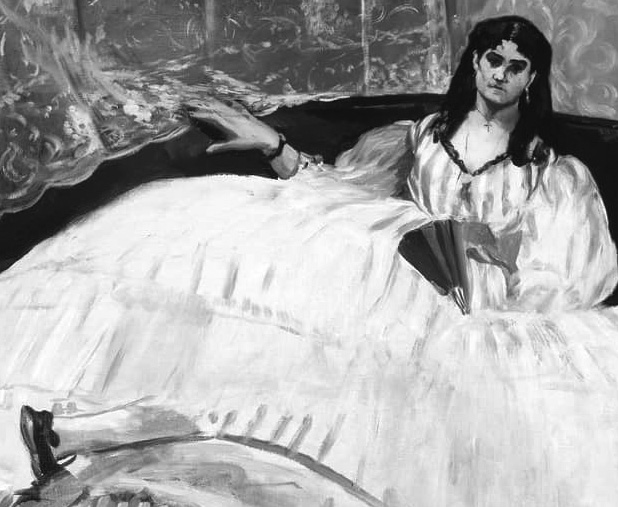 Who was Jeanne Duval?

Jeanne Duval was a Haitian-French woman romantically involved with the 19-centuury poet, Charles Baudelaire. According to Travis Denton, co-producer of Jeanne Duval Editions, Thomas Lux loved the work of Baudelaire, and Denton and Lux were intrigued by the relationship between the poet and his muse. Their relationship was reportedly tumultuous. The only confirmed image of Duval is an 1862 painting by Eduoard Manet. Duval reportedly had mobility issues, and the pose in the painting is a hint to let the viewer know who they are viewing. Learning more about Duval spoke  to Lux's interest in researching a wide variety of topics and sparked naming the press after her.

Jeanne Duval Editions became known for publishing writers' first chapbook. While some well-known names can be found in the range of it's catalogue, most of the poets were unknown when published.

Early volumes featured poets with previous publications, the later works focused on new poets. Thomas Lux and Travis Denton, Associate Director of Poetry @Tech, collaborated on producing the chapbooks in the 2000s. Each volume has the same basic design to keep the focus on the poetry. Jeanne Duval Editions had a radical philosophy when compared to large publishing house: elevate the work of emerging poets rather than create profit.

As of 2021. the majority of poets from the press continue to work in poetry and the written word.

The Great of the Somnambulist - Eva Skrande

Beyond the Shadow's Ink - Mike Soto

Until the Clouds Shatter the Light That Plates Our Lives - Terry L. Kennedy 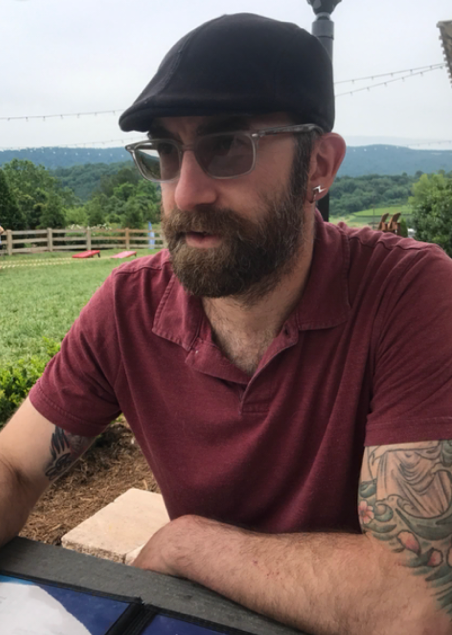 "He had money-he sunk it into a press to publish other poets, and especially younger, less known poets. What a tremendous act of kindness, generosity, and care. That's that deep compassion again. He believed in others: he believed in being meaningful, that we communicate through poetry and for people who really practice that with reckless self-abandon."

Seth Michelson is a poet and translator. Currently a Spanish professor at Washington and Lee University, Michelson is the founding director of the Center for Poetic Research. He also volunteers with undocumented youth in a maximum security detention facility, where he organized the publication of Dreaming of Freedom, the proceeds of which go to a fund for legal support of these youths. Michelson translates poetry, primarily female poets from Latin America.

Like Thomas Lux, Michelson uses poetry as a tool for anyone to find a connection with others and express who they are. "I try to do that [provide support and opportunity] with younger poets. I'll go out of my way to pay forward the generosity that I received." 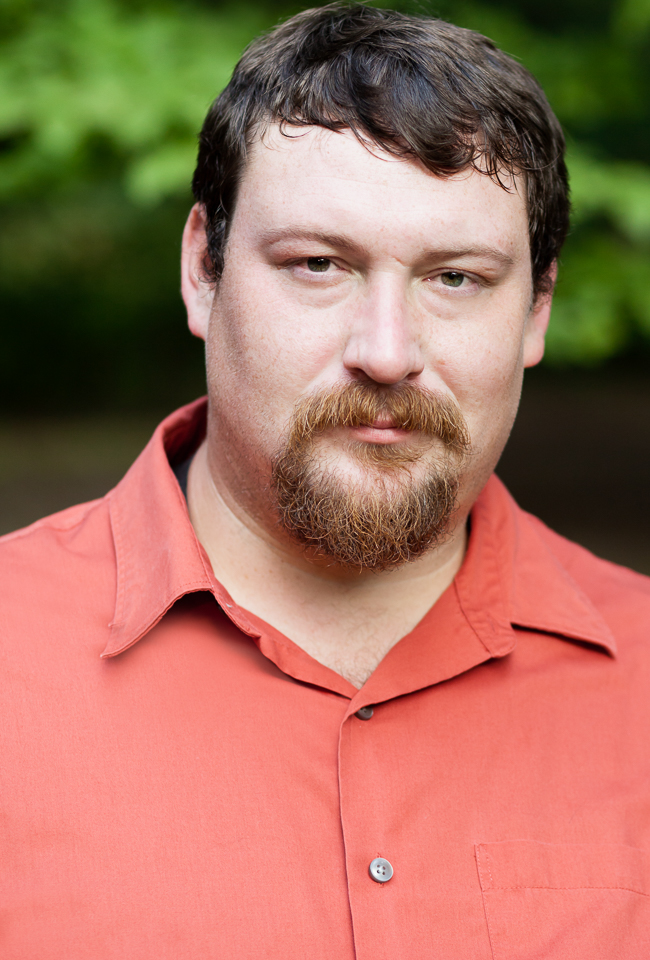 "What Tom really liked about poetry was poetry that really makes you feel something."

A native Georgian, Robert Perry Ivey got to know Thomas Lux as a graduate student at Sarah Lawrence College. Lux served as his thesis advisor. During that process, the chapbook Southbound was formed. Lux "always encouraged that authenticity and that Southern voice." As advisor, Lux encouraged Ivey to think about the order of poems and how to create a story and characters through each work. Lux also influenced lvey's teaching methods: taking time and giving attention to students can help them grow and achieve success in academic areas previously unconsidered by them. By encouraging students to participate in the Georgia poetry community, many change their perception of poetry : "I can't tell you how many times I've heard students say "I didn't know poetry could be like that.' Then next thing you know, I've got three or four more English majors." 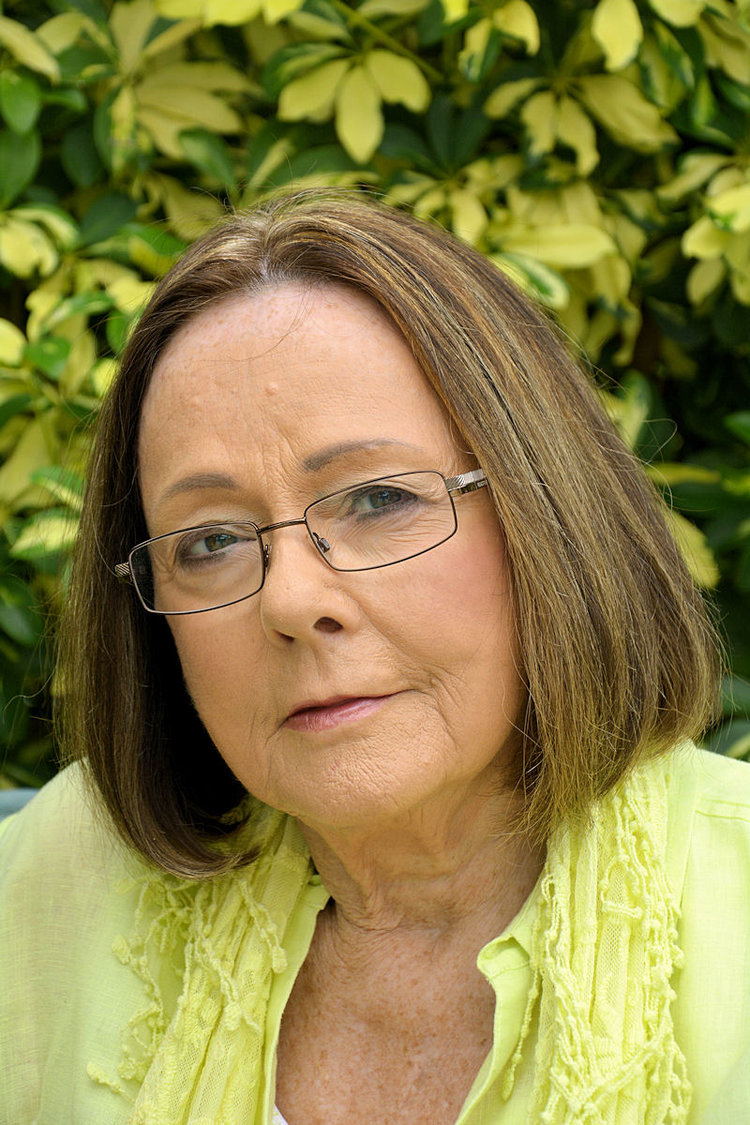 Ginger Murchison came to poetry after a 30-year career in the classroom. She met Thomas Lux at a poetry workshop in Michigan, where he offered her the opportunity to work with him to produce
a series of readings for the Atlanta community. These readings became the basis for Poetry @TECH, and Murchison served as its associate director for five years, and another five years as a McEver Chair for Poetry. Lux offered to publish a chapbook for Murchison as an acknowledgement of the work and practice she put into her own poetry. "I knew the amount it cost him and Jeanne Duval was significant. But it also meant, that's the way he was. It was a gift. He would have meant it as a gift." 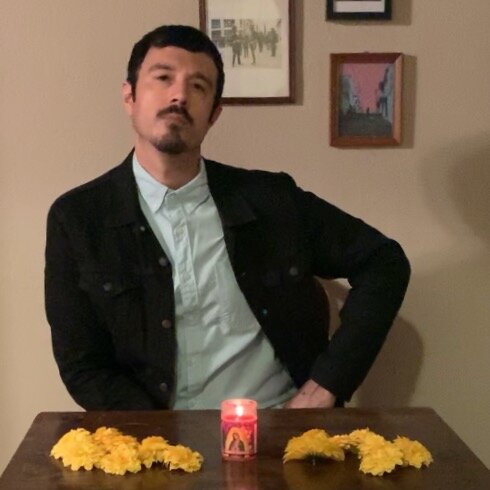 "I would imagine anybody who he wanted to publish, he probably had at least some level of trust that they had a voice."

Mike Soto is a first generation Mexican-American who grew up between East Dallas and Michoacan, Mexico. Soto met Lux while earning a Master's of Fine Arts at Sarah Lawrence College, and Lux served as Soto's thesis advisor. In the summer of 2020, Soto's poetry collection A Grave Is Given Supper was adapted into a stage production with Teatro Dallas and New Ohio Theater's ICE Factory in New York. The communal, community experience of the production echoes Soto's experiences with Lux. "We created this place where people could come and sit and not be worried about the pandemic, at least for a time. And it was very immersive, so it had a very community vibe to it. I was really happy with that, because I felt like there's something about writing something and it's everybody's, as opposed to this document of the poet ... I don't want this to be 'this is me, this is who I am; No, this is just a story that we all get to share."

"When you receive feedback, you learn how to how to create an object that says what you wanted to say, but it also says it's other [people's thoughts]. And I think Tom was brilliant at that."

The impetus for an exhibition exploring Thomas Lux and his commitment to poetry emerged from Kathryn Higinbotham's work, "Radical Generosity," her 2021 Senior Thesis for Literature, Media, and Communication. Higinbotham's initial research and interviews with poets published by Jeanne Duval Editions were conducted under the guidance of Dr. Hugh Crawford and supported by a Georgia Tech President's Award.

Additional support from Jenny Lux and Claudia Lux, as well as Travis Denton and llya Kaminsky of Poetry @Tech, provided images and artifacts for the exhibit. 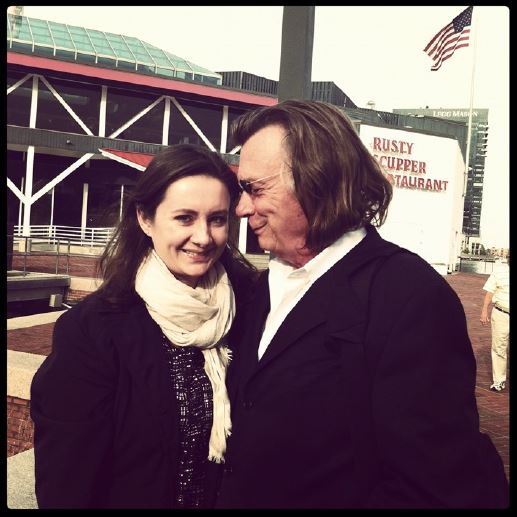 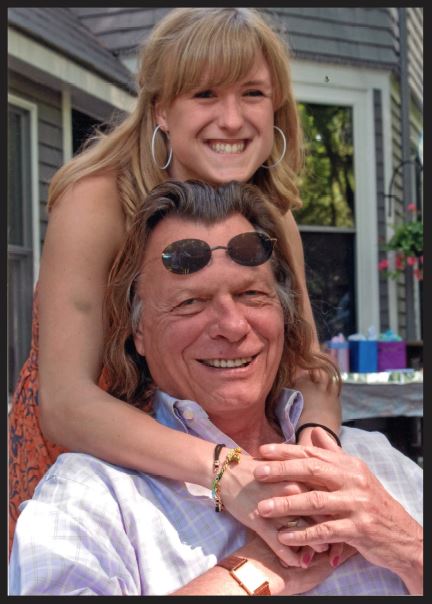 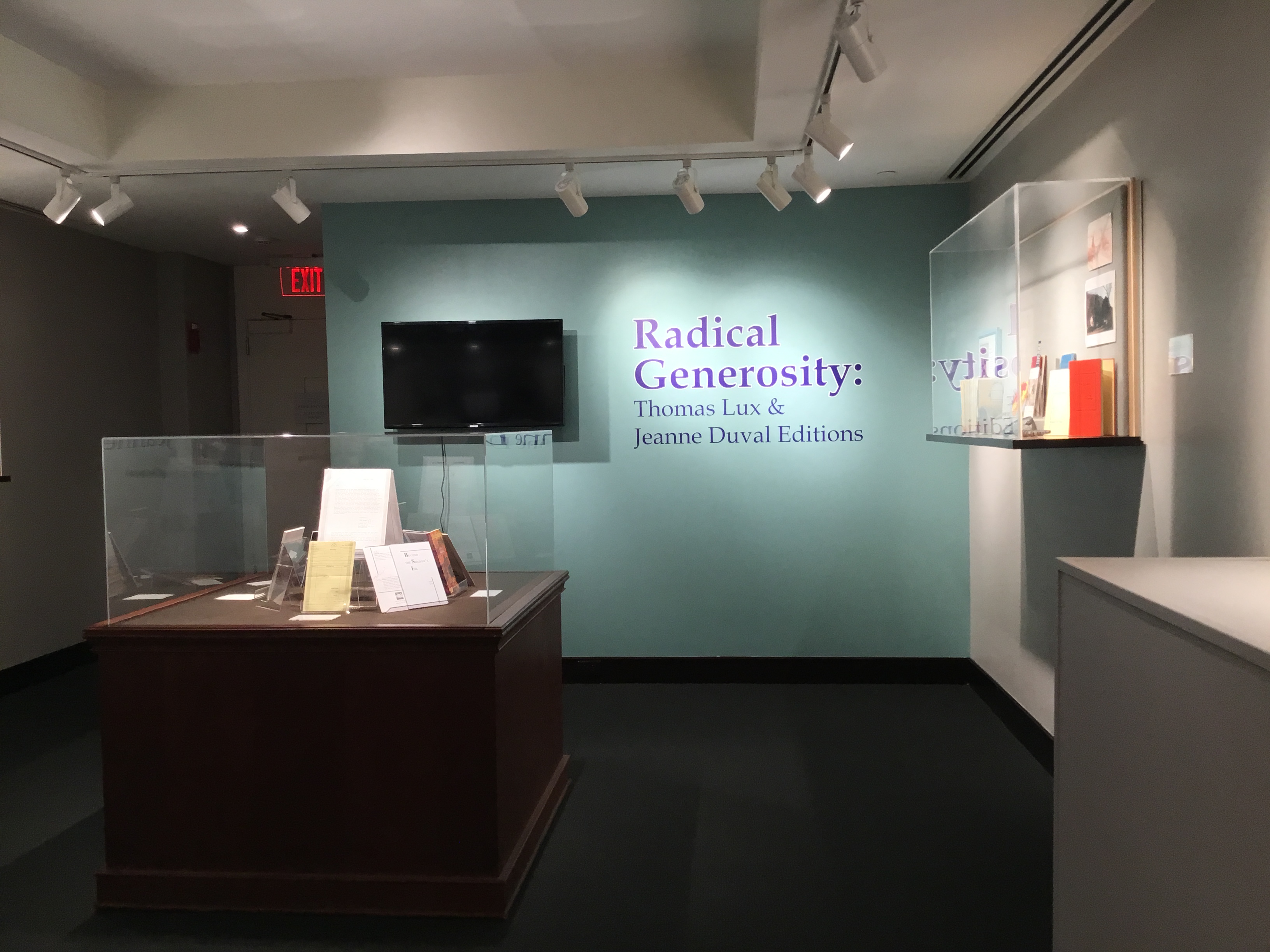 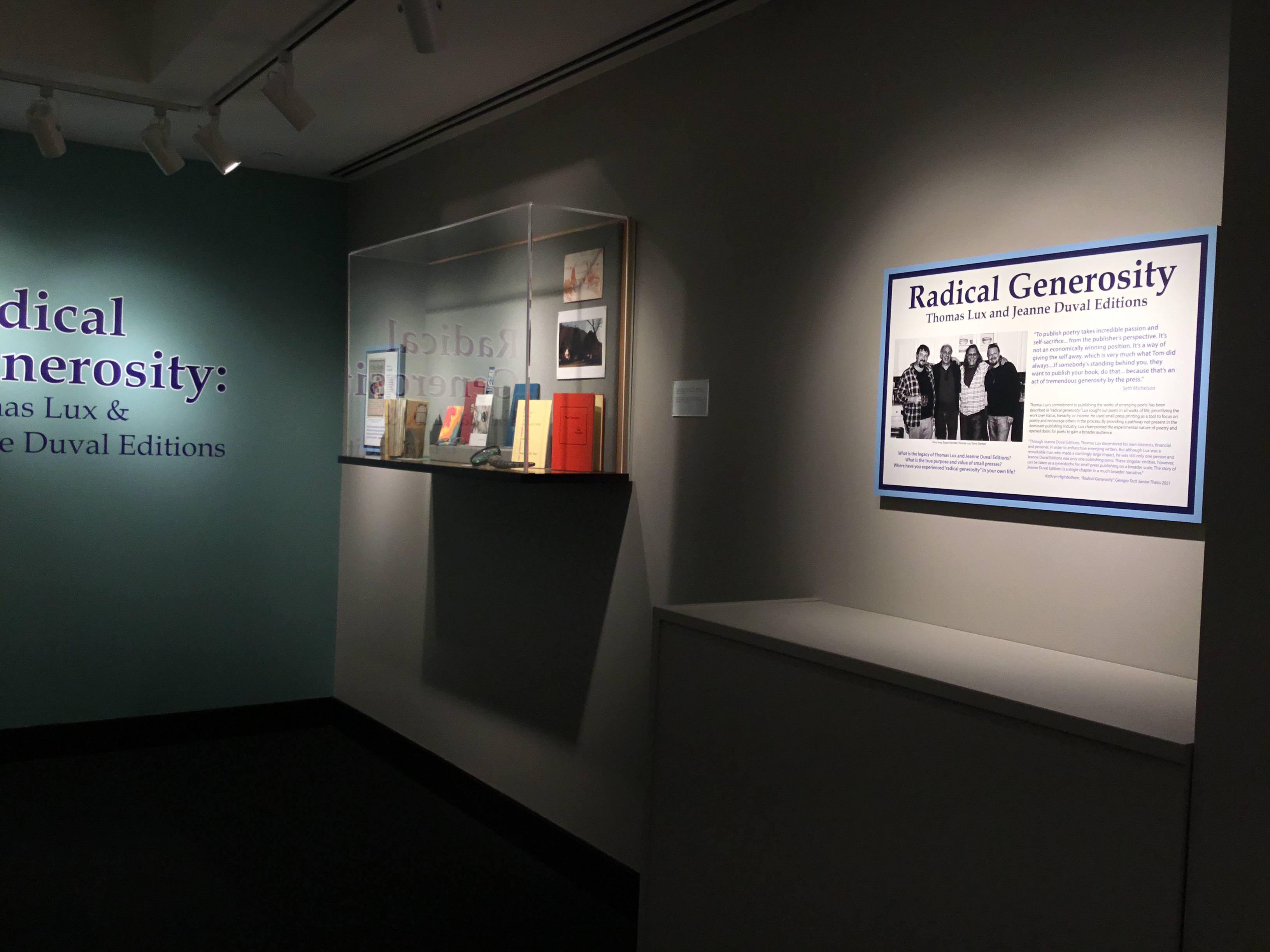 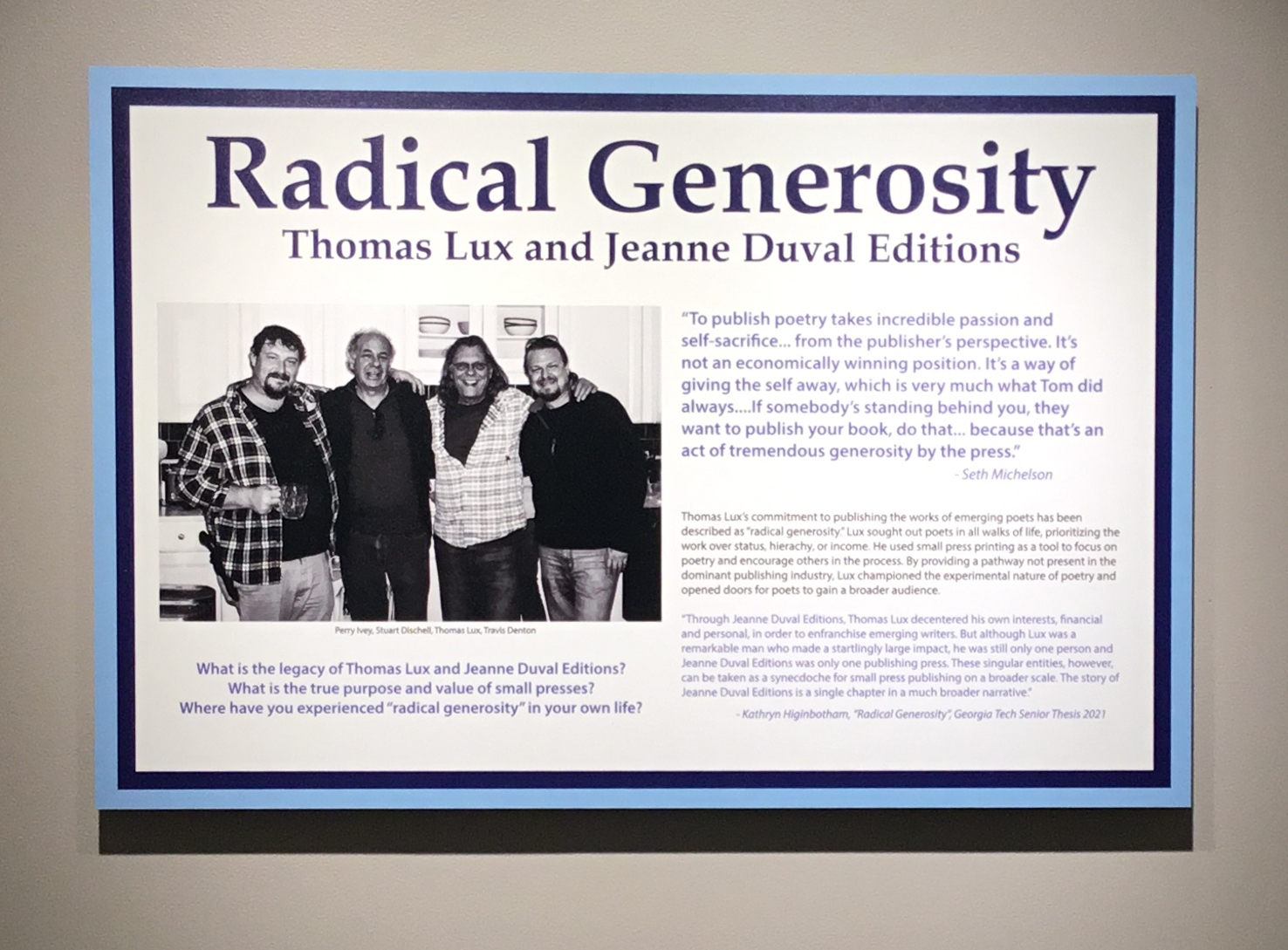 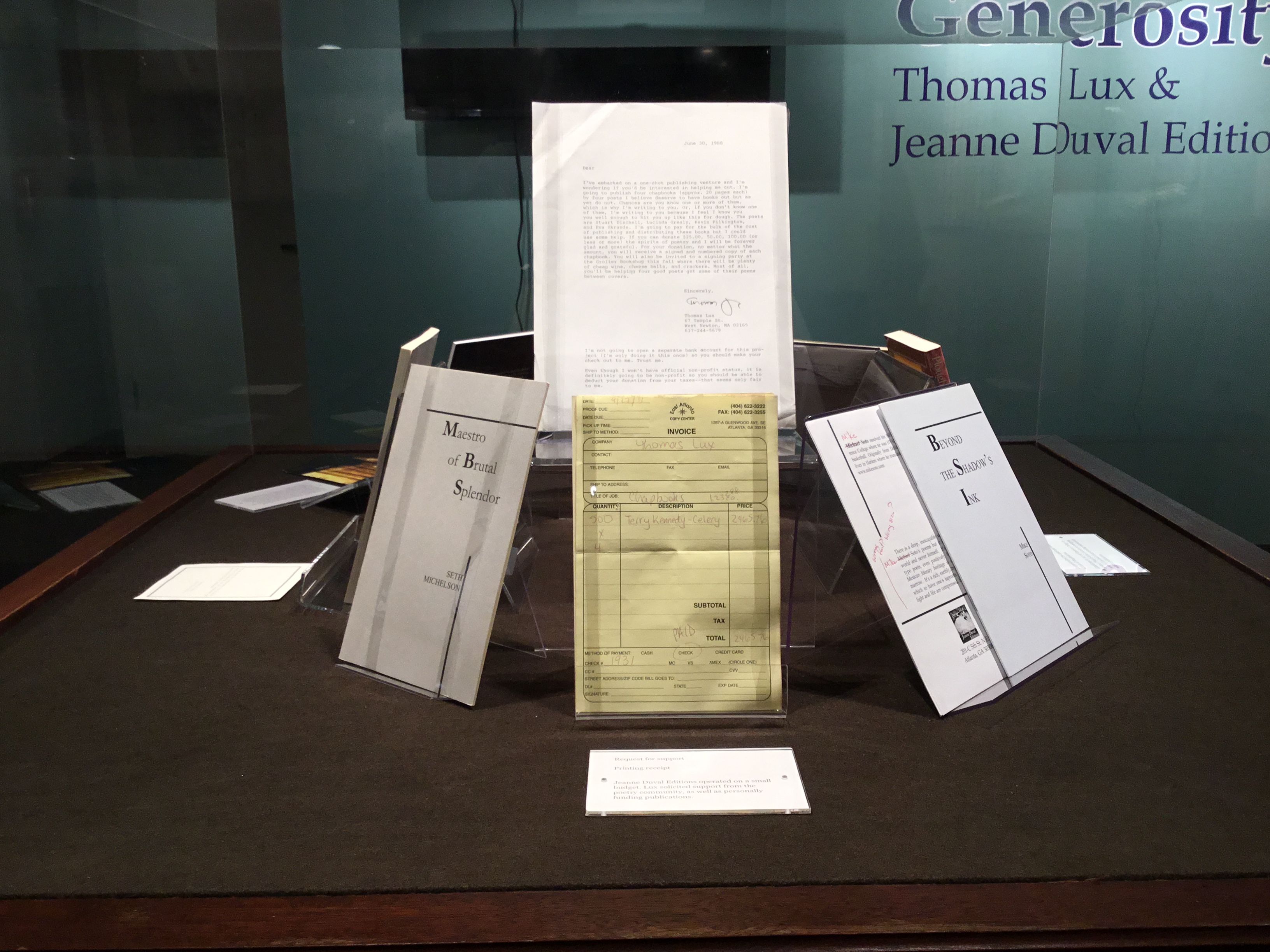 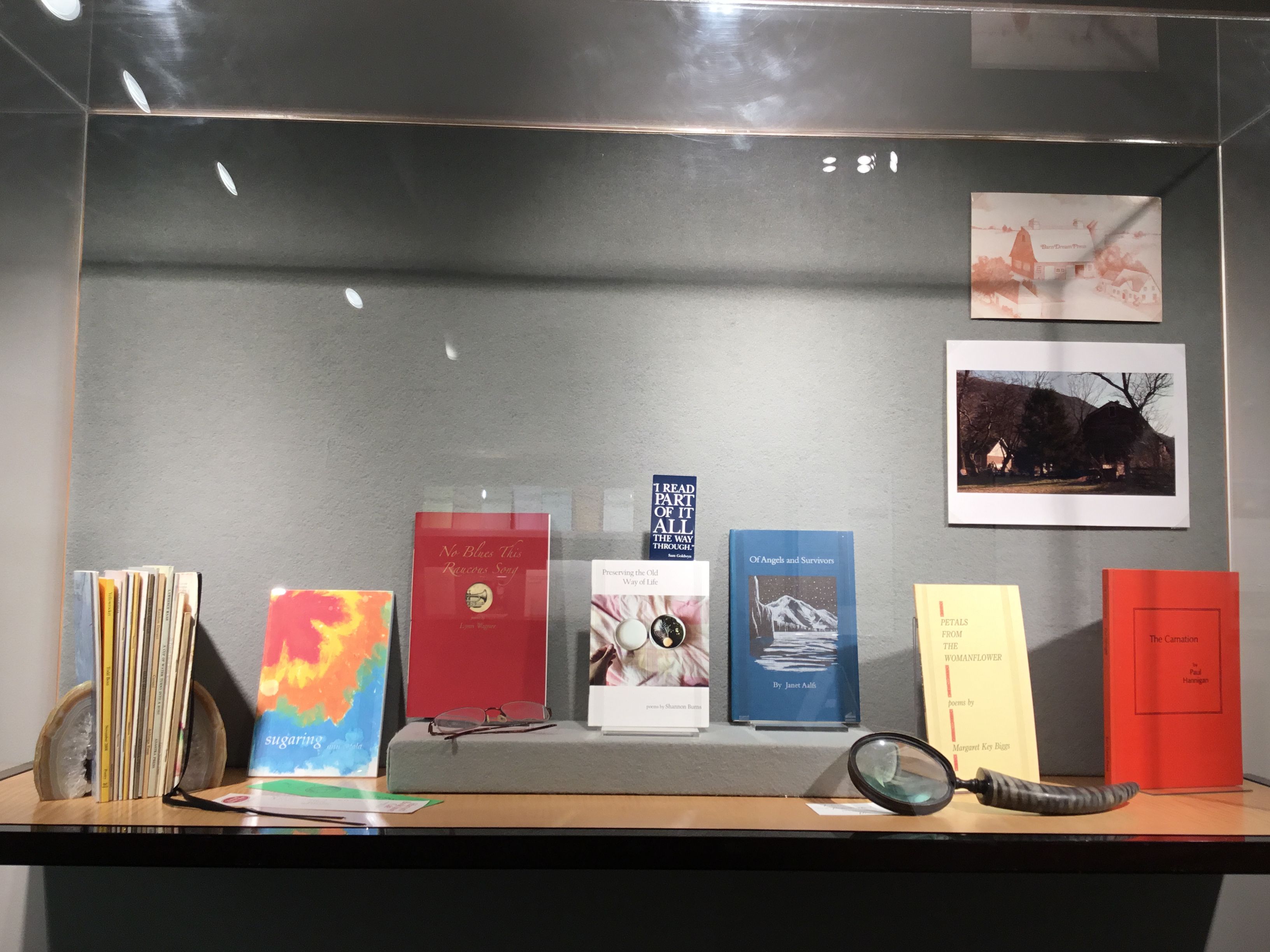 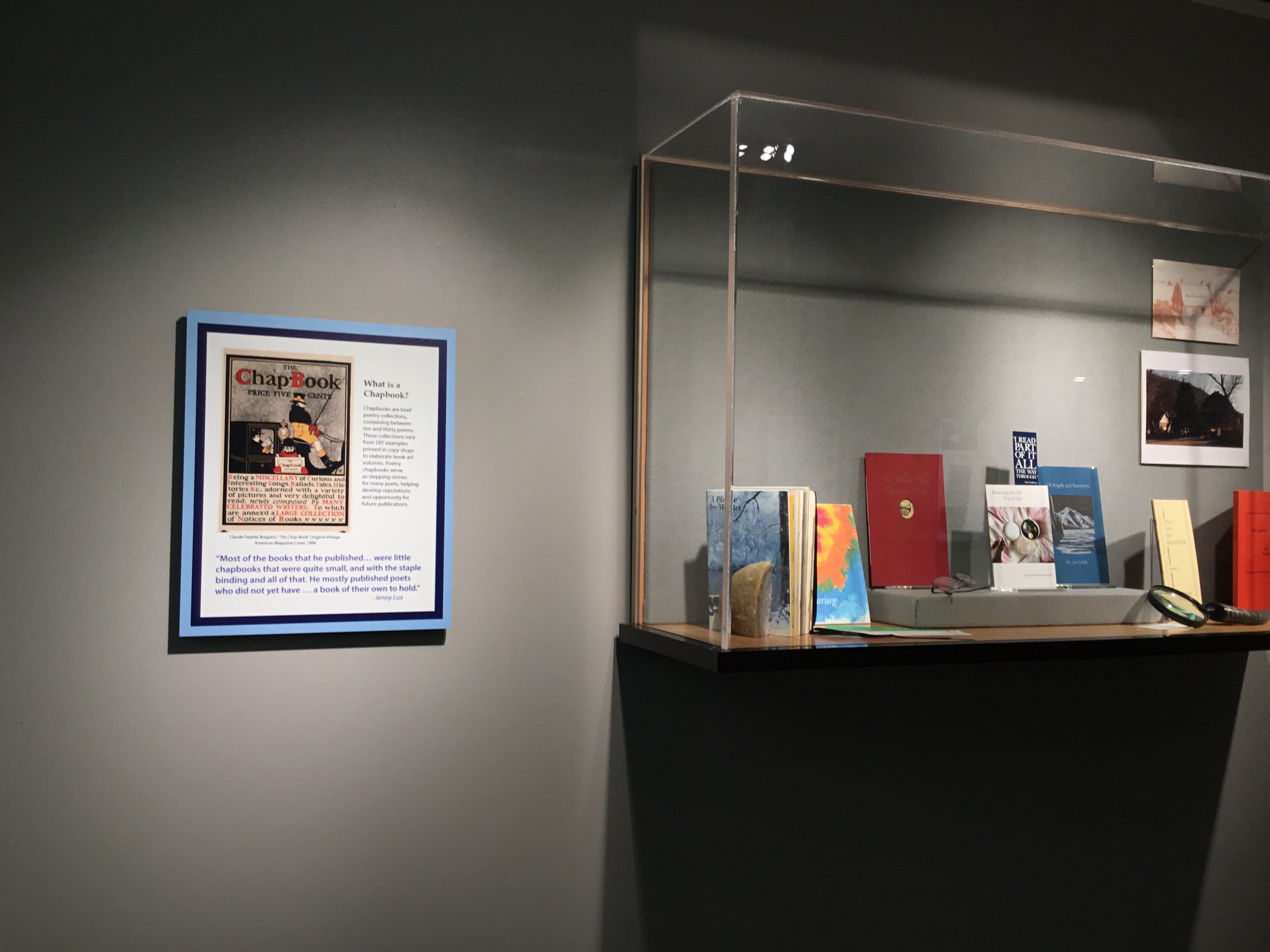 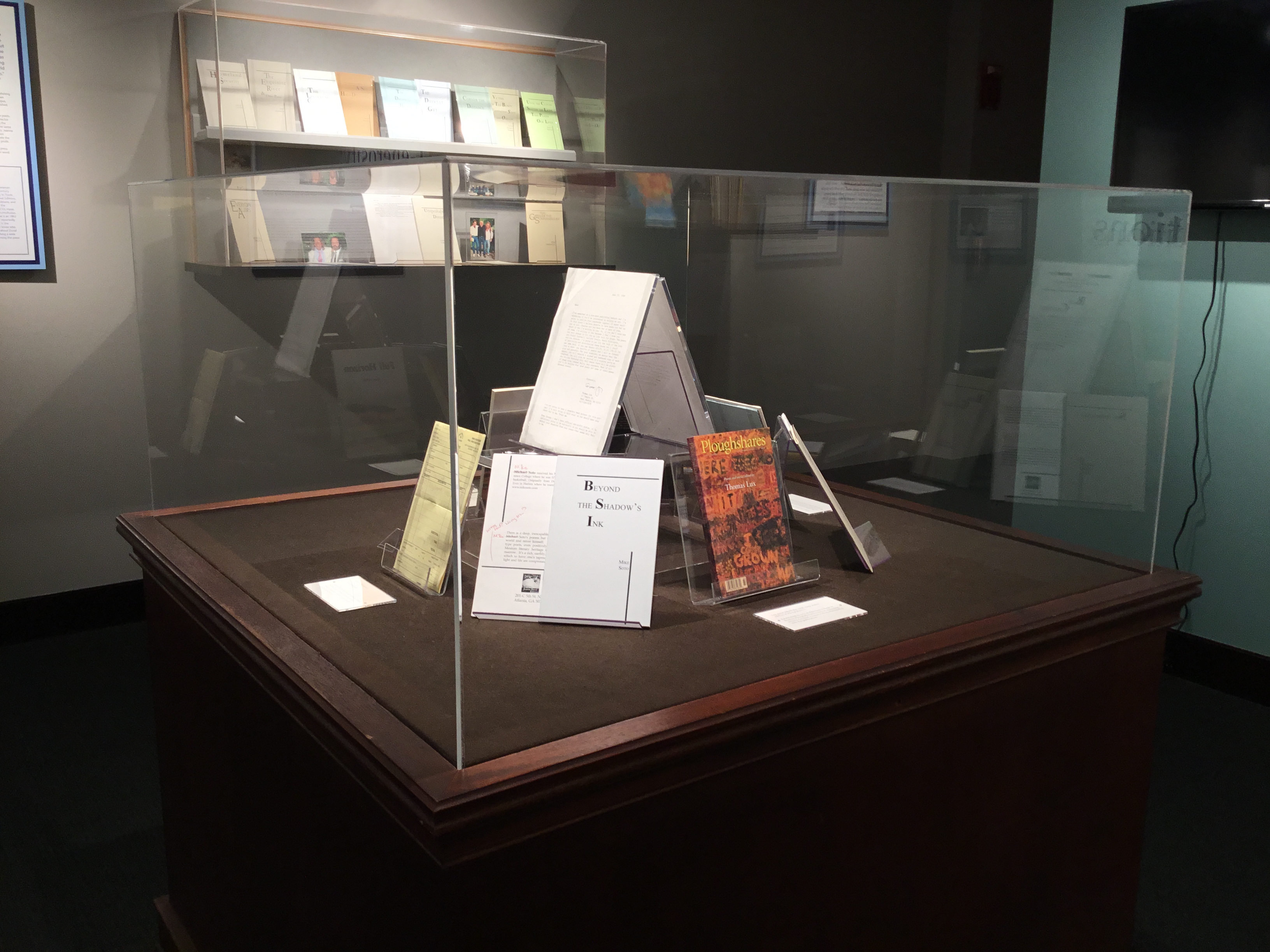 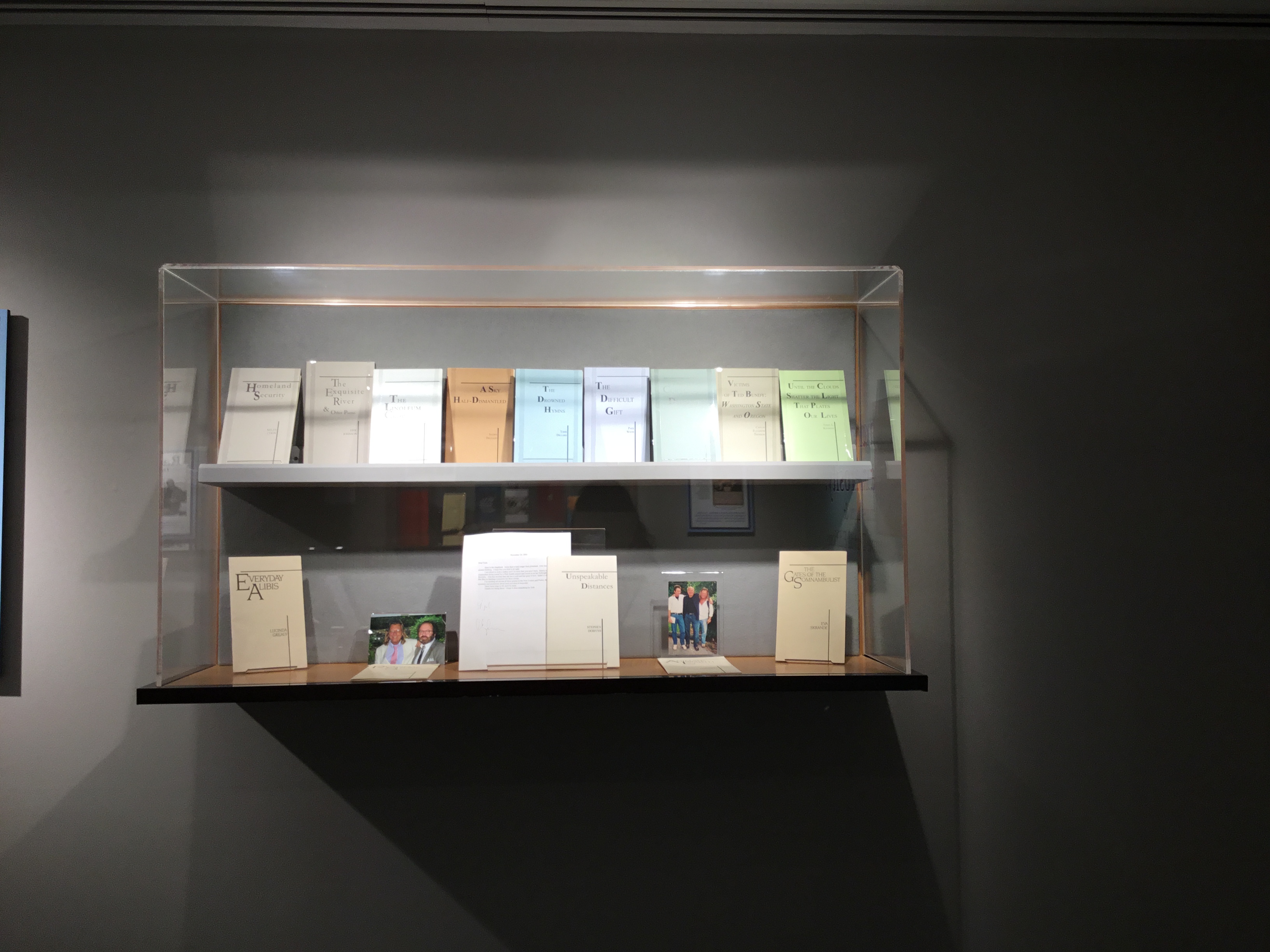 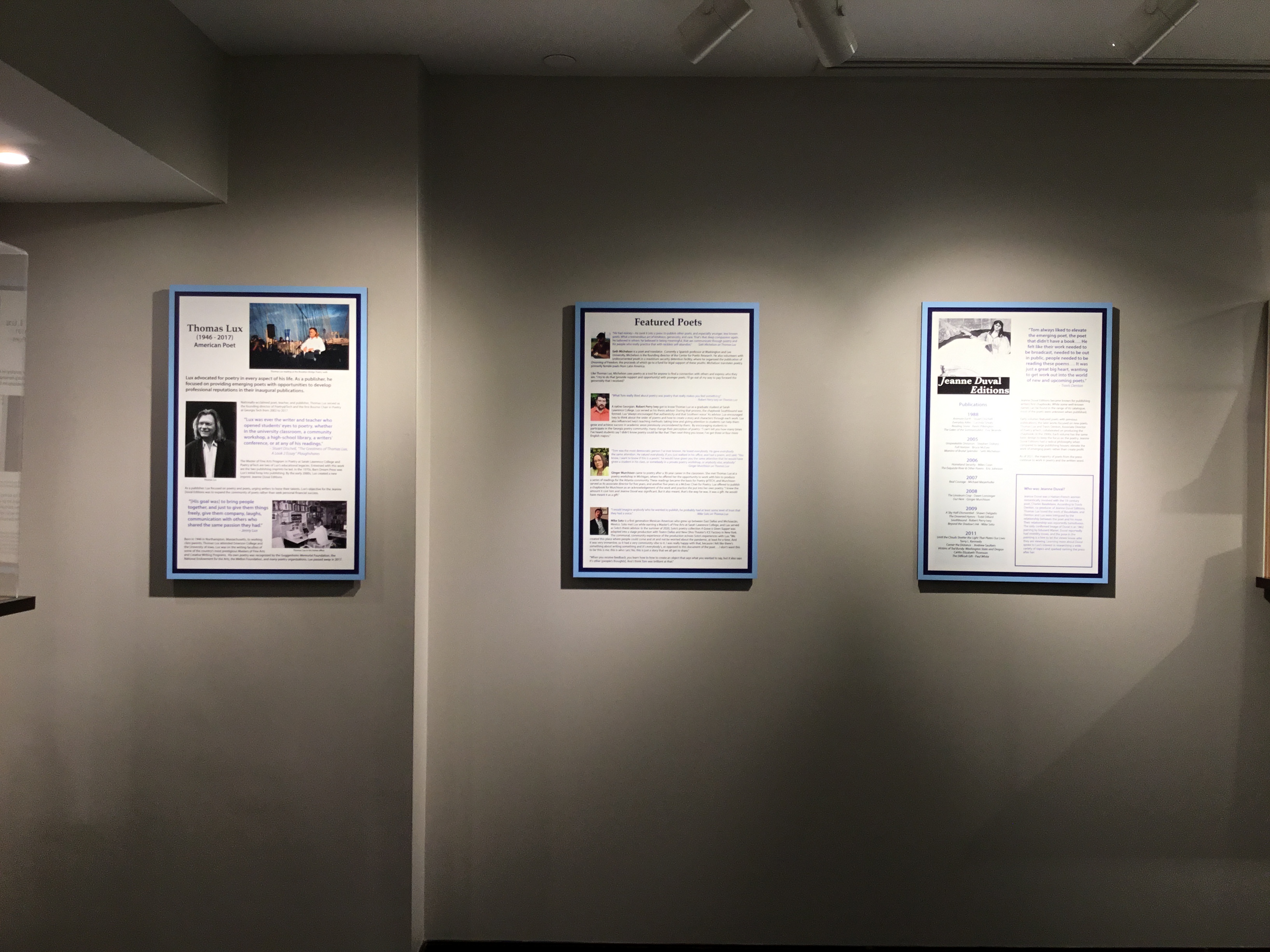 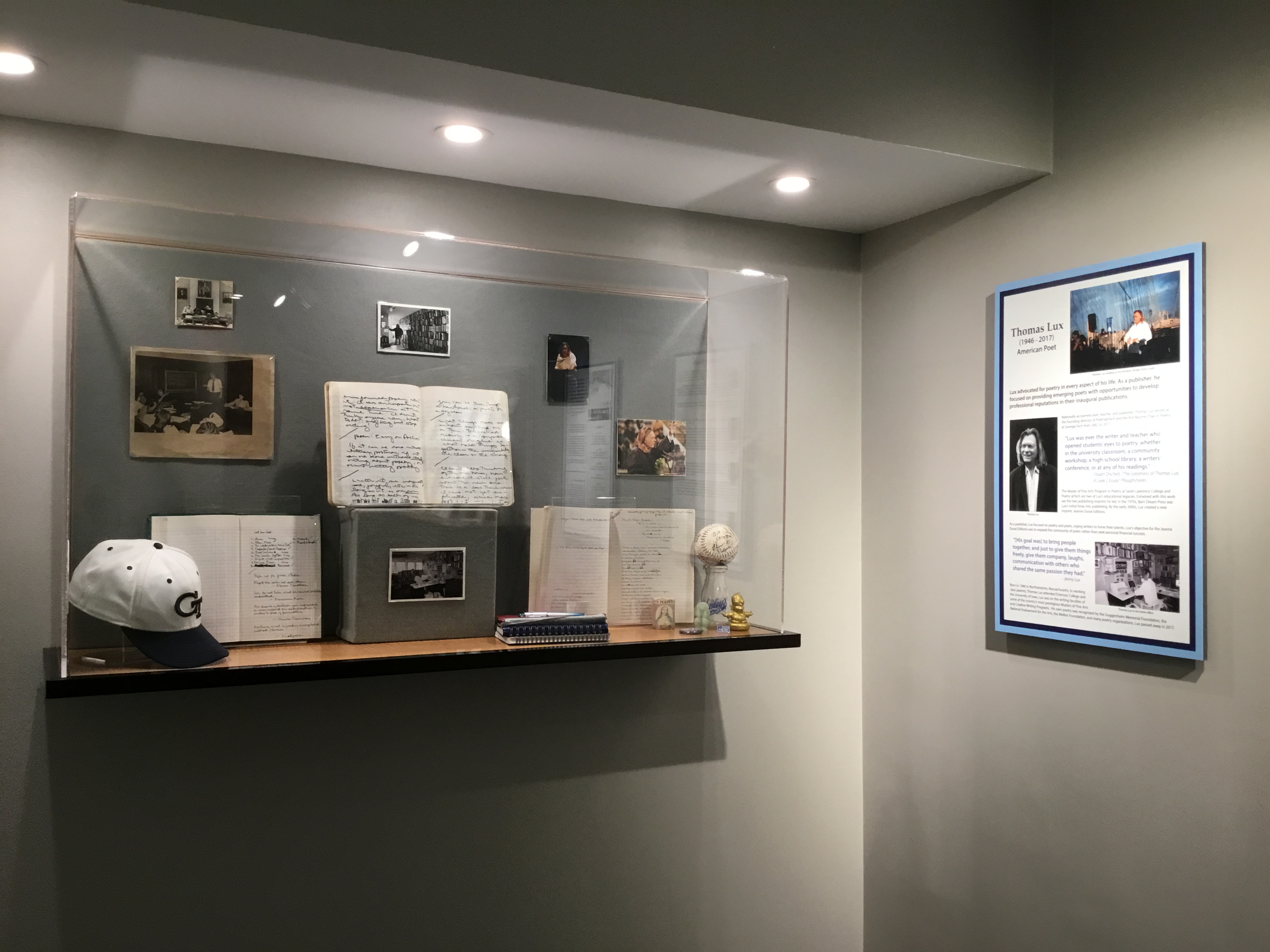 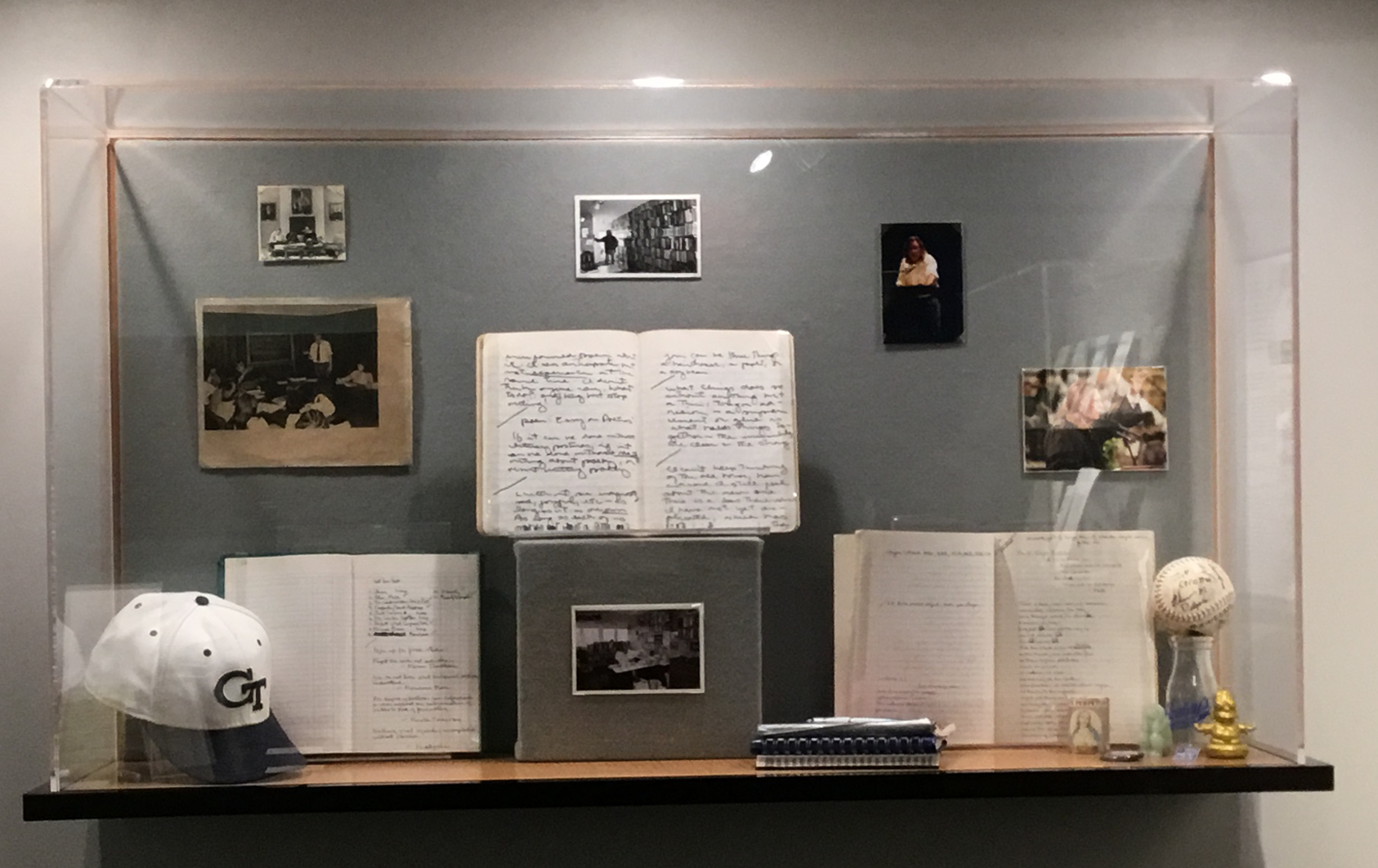 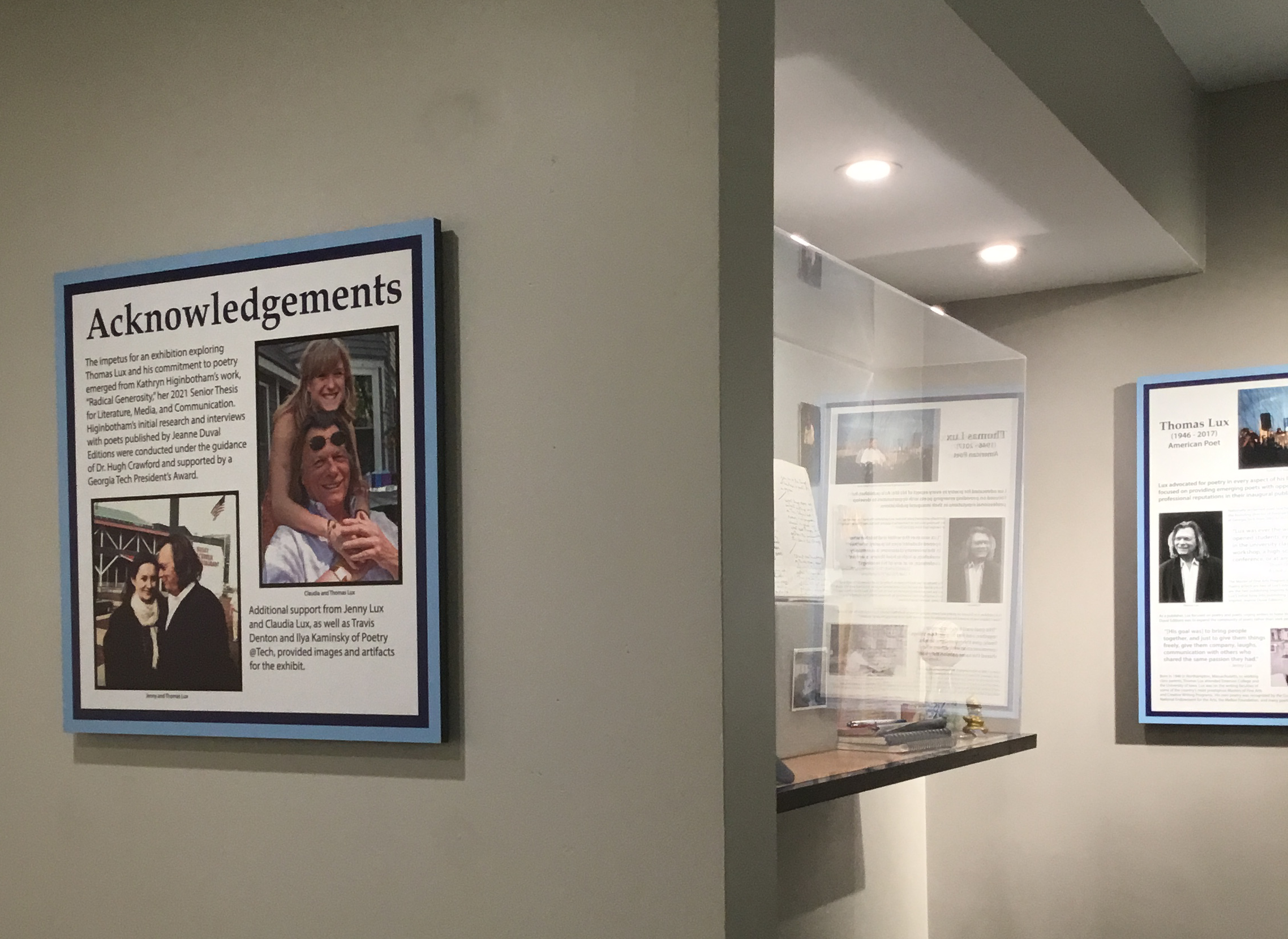