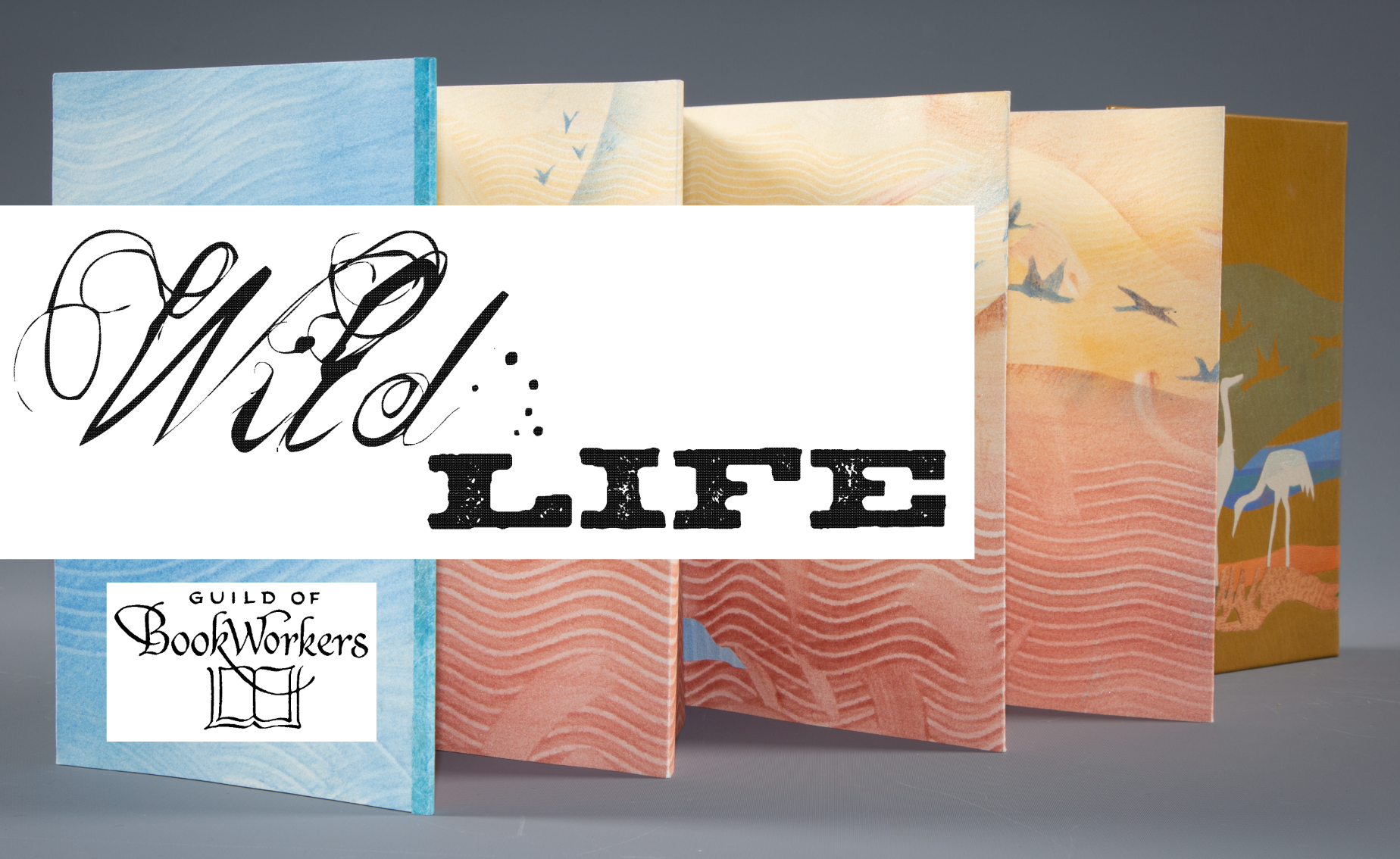 The Robert C. Williams Museum of Papermaking is pleased to announce the opening of  "Wild/LIFE" now through December 3, 2021.

This exhibition features approximately 50 works by members of the Guild of Book Workers, a book artists organization that promotes interest in and awareness of the tradition of the book and paper arts by maintaining high standards of workmanship, hosting educational opportunities, and sponsoring exhibits. Members were invited to interpret the theme of “wildlife” in any way they wish, be it literal or abstract, humorous or serious. In a biological sense, wildlife describes the myriad of creatures sharing this planet, interacting and adapting, all connected to each other and their environment. "Wild" also describes an untamable essence that survives despite the constraints of society and culture. As craftspeople, knowledge of materials and keen observation of how they behave (and often how they refuse to comply) is an integral part of the practice of book making, and a reminder of how traditional bookbinding materials originate in nature.

Works include fine and edition bindings, artists books, broadsides (letterpress printing, calligraphy, and decorative papermaking) and historical binding models. Both the bindings and framed works to be exhibited were selected by a jury to ensure that they are of excellent quality.

"We're thrilled to be a host site for 'Wild/LIFE.' The exhibit showcases some of the incredible work being done by book makers around the country," says Jerushia Graham, Museum Coordinator. "This theme is particularly exciting, seeing the different ways that people bring wildlife into their works. There is incredibly detailed work, and truly beautiful objects that really make the viewer think about how nature influences us, and how we influence nature."

ABOUT THE GUILD OF BOOK WORKERS: https://guildofbookworkers.org/about

The Guild of Book Workers was founded in 1906 to "establish and maintain a feeling of kinship and mutual interest among workers in the several hand book crafts." Among its early members are well-known artist-craft workers such as bookbinder Edith Diehl and printers and typographers W.A. Dwiggins and Frederic W. Goudy.

The Guild still believes, as did its founders, that there is a responsibility to sustain the crafts involved with the production of fine books. Its members hope to broaden public awareness of the hand book arts, to stimulate commissions of fine bindings, and to stress the need for sound book conservation and restoration.

Over 100 years later, the Guild is still vital, with regular traveling exhibitions, a journal, ten regional Chapters, and an annual Standards of Excellence seminar. Guild membership exceeds 800 and has expanded internationally. The organization is still run by volunteers. GBW is incorporated as a 501 (c) (3) non-profit organization based in New York.

The Robert C. Williams Museum of Papermaking is open Monday-Friday, 9-5. The museum is closed all Institute holidays. Admission is free, but groups of 10 or more must book a fee-based program in advance.

The museum observes all COVID regulations in place by the University System of Georgia and Georgia Tech. Masks are encouraged, but not required, when visiting.