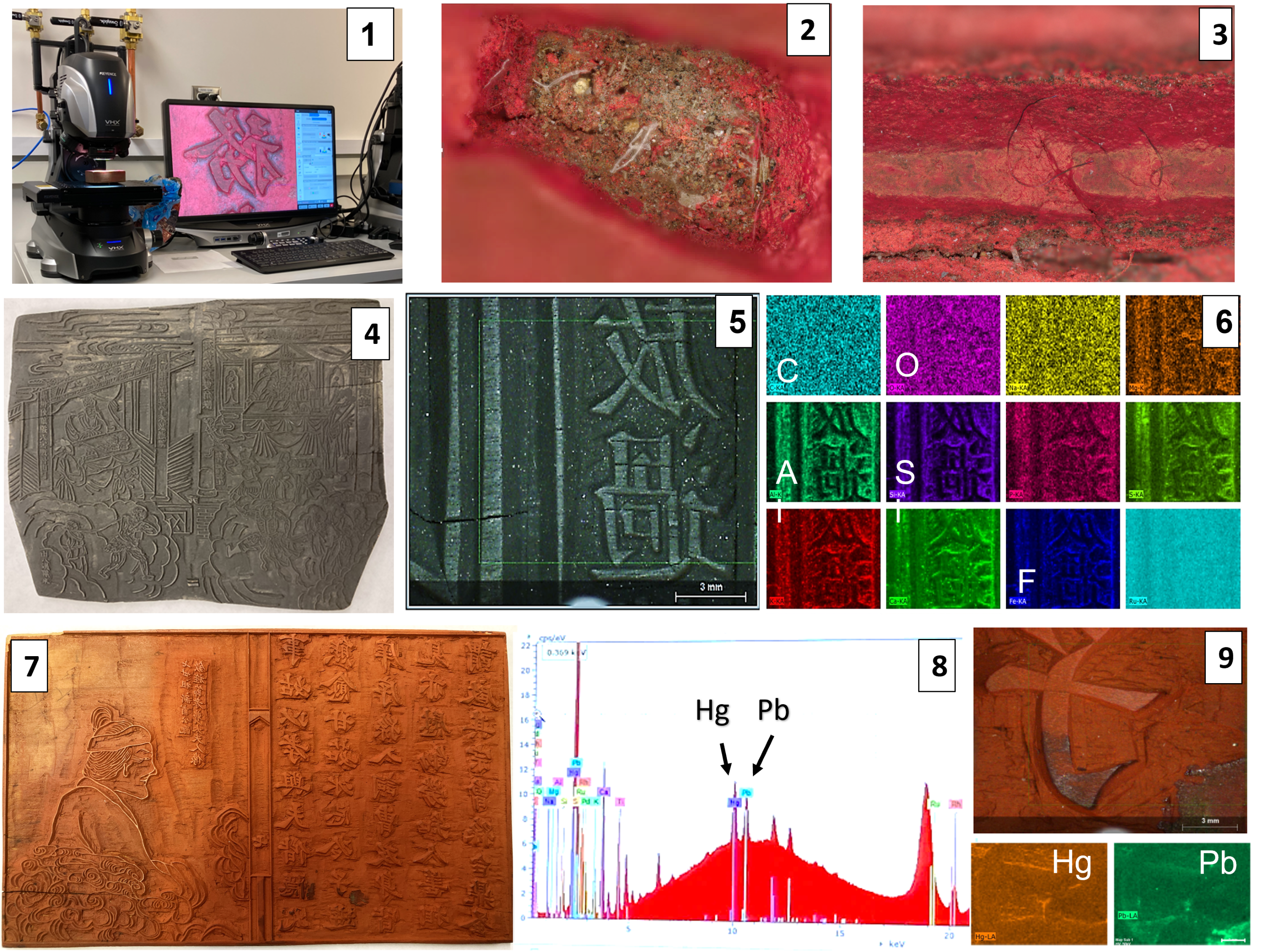 The Robert C. Williams Museum of Papermaking holds a collection of woodblocks and woodblock prints from the 19th and 20th centuries from China and Japan. They were collected by the museum’s founder Dard Hunter during his travels in East Asia in the 1920s and 1930s.

Printing on paper gave a greater functionality as a medium for literature, culture, art, documentation, and especially for scholarly, religious, and governmental texts.

Through historical context and records, we can learn much about how these woodblocks were used and the significance of the prints. With analytical techniques, we gain more insight about the woodblocks beyond what we can observe with the naked eye. In collaboration with the Materials Characterization Facility* (MCF) at Georgia Tech, the Museum staff learned how advanced characterization techniques gives us more information on story of the woodblocks in the Paper Museum’s collection.

With the help of the Keyence Advanced Digital microscope and MCF staff, the Museum staff were able to get a closer look at the surface and into the depressions between the carved Chinese characters of the woodblock. The Keyence Digital Microscope (Figure 1) is a light microscope that allows for 3D topographical mapping of surface features down to a few micrometers. It has ability to combine images in the vertical direction to make a full focus, high magnification image, and depth profiles.

What we learned from Digital Microscopy

Features we were able to see through microscopy

What else could we learn from this new information?

Further analysis and testing of the unexpected materials in our woodblock could give us much deeper understanding of the environment and the time that the woodblocks were used in. For example, fibers found on the block can be tested to identify the plant material that was used to make the paper for printing. Analysis on the hair could give insight on the type of animal that the hair was used from. Furthermore, analysis on the sand and gravel and on the ink, gives a better picture of the minerals that were present and available in the area and time period the woodblocks were in use.

Knowing what our artifacts are made of and the materials they contain informs how we handle and store them to ensure not only the safety of the object, but also of the museum staff and visitors. Elemental analysis shows us what elements and therefore minerals were likely used as colorants in the inks left behind on the woodblocks.

Black colorants used in ancient Chinese paints and inks are known to typically contain carbon black, which is inert or harmless, but can also contain lead-sulfide, which is hazardous to touch and breathe in. Red inks could include a variety of pigments such as cinnabar, red lead, or iron. Cinnabar is particularly interesting because it gives a deep red color to inks but also contains α-mercury sulfide, which also may be hazardous when inhaled or touched in large enough quantities. Given the potential presence of hazardous substances such as lead and mercury from the inks and the wide-spread use of cinnabar in Chinese colorants, we wanted to confirm whether the woodblocks in our collection contained them or not. Our historical knowledge suggested it was likely, but scientific tools could confirm it with certainty.

X-Ray Fluorescence Spectroscopy is a common technique in elemental analysis of artifacts because it is non-destructive and, depending on the instrument, can house larger samples than typically possible with other elemental analysis techniques. This technique bombards an object with high-energy X-rays and measures the characteristic X-rays that come off from specific elements in the material. Using a Bruker M4 Torndado Plus XRF at the MCF, we obtained elemental maps of both black and red woodblocks. The elemental maps are made by measuring the characteristic X-rays of different elements over a surface and one micrometer deep into an object.

In the black Chinese woodblock (Figure 4 and 5), besides the abundance of oxygen (O) and carbon (C) there were trace amounts of several different elements. However, we found relatively higher concentrations of aluminum (Al), silicon (Si), and iron (Fe). As seen in the elemental map (Figure 6), these were noticeably present in the spaces between the characters and raised areas for the print.

From the elemental spectra of red woodblock samples (Figure 7), peaks for mercury and lead were detected (Figure 8). This means that the red woodblocks were found to contain lead and mercury (Figure 8 and 9) and red pigments are likely cinnabar and red lead.

Conservation, with the use of analytical techniques, broadens our understanding of artifacts, their history, and how to protect them and museum staff and visitors. In collaboration with the MCF and microscopy and elemental analysis, Paper Museum staff were able learn more about the physical qualities of Chinese woodblocks in our collection. Through microscopy, we saw unexpected features and materials that we could not otherwise see, including paper fibers, hair, and sand. We learned what elements are present in the inks and surface of the woodblocks, including potentially hazardous ones such as lead and mercury. This changes the way we handle and take care of the artifacts. Being able to utilize the equipment and expertise of the Materials Characterization Facility enables us to use cutting-edge techniques to better tell stories that are hundreds of years old.

The museum would like to thank the Materials Characterization Facility Staff: David Tavakoli, Todd Walters, Walter Henderson, and Rathi Monikandan. 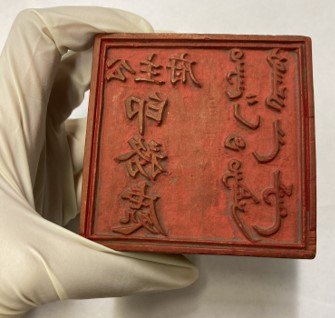 The Robert C. Williams Museum of Papermaking is open Monday – Friday, 9-5. Admission is free, but groups of 10 or more must book a fee-based program in advance. The museum is closed all Georgia Tech holidays.